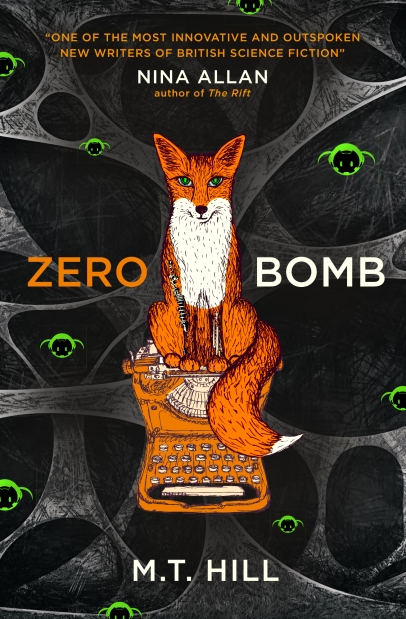 This book was sent to me by Titan Books in exchange for an honest review.

Target Audience: Readers who like their political science-fiction thrillers with a dose of genuine and scary near-future reality. Multiple story telling formats across the many acts and plenty of hugely relevant concepts are contained within a thought-provoking and thrilling narrative.

M.T. Hill was born in 1984 and grew up in Tameside, Greater Manchester. He is the author of two novels set in a collapsing future Britain: Dundee International Book Prize 2012 finalist The Folded Man, and 2016 Philip K. Dick Award nominee Graft. He lives on the edge of the Peak District with his wife and son.

The near future. Following the death of his daughter Martha, Remi flees the north of England for London. Here he tries to rebuild his life as a cycle courier, delivering subversive documents under the nose of an all-seeing state.

But when a driverless car attempts to run him over, Remi soon discovers that his old life will not let him move on so easily. Someone is leaving coded messages for Remi across the city, and they seem to suggest that Martha is not dead at all.

Unsure what to believe, and increasingly unable to trust his memory, Remi is slowly drawn into the web of a dangerous radical whose ‘70s sci-fi novel is now a manifesto for direct action against automation, technology, and England itself.

The deal? Remi can see Martha again – if he joins the cause.

Thank you Matt for taking some time to answer a few questions about your latest novel, Zero Bomb. I was stunned by how thought-provoking and dynamic it was. Could you give us your own personal overview of what readers should expect in the book?

Hi Stuart! Thanks for having me, and thanks for reading it! Zero Bomb is (mostly) set in 2030s England, where rapid automation has displaced jobs, the social safety net has been dismantled, and the state runs total surveillance to keep a lid on dissent. The story follows a traumatised man called Remi who’s lost his daughter Martha and is viewed as an ideal candidate for radicalisation by a group of neo-luddite terrorists. So, on one level you can expect conflict and moral questions about a possible future, and then on a more intimate level you have a story about grief and family.

What was your inspiration for Remi, Martha and the events of Zero Bomb?

It’s pretty safe to say the book’s inspired and preoccupied by the mess we’re in. I know it sounds miserable, but our whole system is in crisis and the powers-that-be are telling us otherwise, even though we can clearly see things coming down around us. Things like Brexit have pulled back the carpet, and we don’t want to look at what’s been growing underneath. It’s been scary to look at my kid and think about what he might grow up to be, the kind of country this could be. For Remi and Martha’s relationship, I jumped into that feeling – it gets a bit raw in places.

There are plenty of concepts I enjoyed in Zero Bomb, especially Rupal the fox who was inspired. Where did your passion for science-fiction come from?

I’m glad you like Rupal! She was a lot of fun to write. I grew up obsessed with programmes like Thunderbirds, Captain Scarlet, The X-Files, The Outer Limits. Games have been influential, too – the original Deus Ex was totally mind-blowing for me. In terms of formative SF literature, I’d have to look back to stuff by Iain M. Banks and Michael Marshall Smith. Their work transformed my ideas of what you could do with SF, and I went in from there.

What was the most challenging part of writing about humanity’s vision of, and eventual reaction to, an automated society?

Its massive complexity. I’m not trying to give the answers – who can know? And I’m definitely not here to lecture people. So I’ve tried to make sure the book reflects that uncertainty; that characters’ solutions in the book are fraught with their own tensions and problems. In some ways it’s been a selfish pursuit, a case of working through my own responses to an imagined situation. And I still don’t know what I really think. There are very persuasive arguments that, with the right structures in place, significant automation could be an incredible thing, a liberating thing. But if you look at how power is concentrated around the world, it’s hard to see it going that way.

How do you expect readers to react to a thought-provoking novel like Zero Bomb?

At this point, just after release, you can only keep everything crossed that people enjoy it and find it compelling enough to finish, and maybe even talk about it. In a more immediate sense… well, the narrative takes an unexpected turn just before halfway through that I think might wrong-foot (or even miff) some readers, who might have been expecting a kind of more conventional cat-and-mouse thriller. Which is fair enough – the blurb sets that up. But the structural changes are for a good reason, promise!

How long did it take you to write Zero Bomb and did you have to do much research?

Probably just over a year from drafting to submission at the end of 2017. Then another few months editing it last summer. I’d say most of my research was done by reading and reacting to the news this last couple of years, and being interested in these subjects anyway. It helps that there’s not tons of hard science involved – that’s not the kind of SF I write. I did get to read plenty about foxes, though!

Is there a part of the book that you are particularly proud of? Do you have a favourite quote you can share with us?

I’m glad I did the extracts from the 70s novel-within-the-novel. I put them off until I realised how important they were, and now they sit right at the heart of the story. It was a bit cavalier in hindsight, but if it’s not hard to do, it’s not challenging you either, which can quickly lead you down some well-trodden roads. The first line of that section was in my notes from the very start: ‘In the coldest harbours of tomorrow, the machines stood victorious.’ Which probably sums up the book nicely.

Did you always have your eye set on being a writer/author and what sort of books did you grow up reading?

It’s tempting to say you’ve had a lifelong passion for writing when you look back over stuff – I don’t know if that’s true. I can definitely say I’ve been a keen reader since I was a child. I made some kind of proper commitment to writing in my late teens – I wanted to be a journalist, and now copywriting pays the bills.

I grew up with all sorts: Enid Blyton, Roald Dahl, the Goosebumps series, dozens of Point Horror novels. All of which have fantastical elements. I try to read widely, and when I’m working on a project I actually avoid reading much SF, which means I’m always catching up on new work and feeling guilty about it.

Have you got a hobby/activity you do to wind down from all the writing?

I go to the climbing gym when I can, and I do a bit of hiking and running. They’re all good for the head. Or my head, anyway. I’ve spent the last year-plus playing lots of Destiny. And then we have our little boy blasting round the house. He takes up a lot of time and energy in the best way.

I read it a year ago, but I’ve thought about every day since, so I’m going to cheat and recommend Svetlana Alexievich’s Chernobyl Prayer. It’s a history of the nuclear disaster, told by its survivors. It’s terrifying, urgent, incredibly moving, and generally a massive achievement. I’d buy it for everyone if I could.

Thank you to M. T. Hill for giving some interesting insights into his most recent SF novel Zero Bomb. It is always refreshing and challenging to see SF thrillers with a dose of modern reality. I really enjoyed reading Zero Bomb for two reasons. First was Hill’s delivery. Each act was a new format or perspective on the events of present and past. The other was the intriguing tones, atmospheres and concepts that Zero Bomb explores. I definitely came away from this novel with some interesting afterthoughts. Zero Bomb is definitely the sort of novels we need to be reading in the run up to an even more technological future. A reminder that newer isn’t always better. Thank you for checking out this post and make sure to come back for plenty more Q&As, reviews and much more.

The Book Was Better
Book Rant Book Reviews
Being Anne...