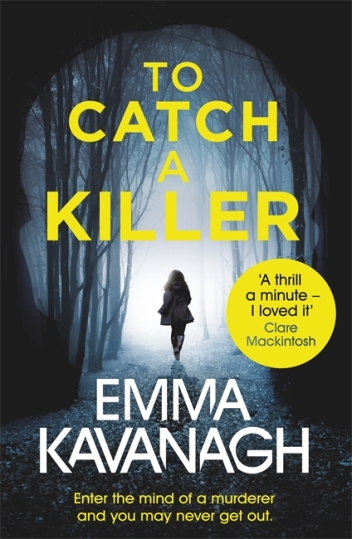 This book was sent to me by Orion Books in exchange for an honest review.

Emma was born in Wales in 1978 and currently lives in South Wales with her husband and their one year old son. She trained as a psychologist and after leaving university, started her own business as a psychology consultant, specialising in human performance in extreme situations. For seven years she provided training and consultation for police forces and NATO and military personnel throughout the UK and Europe.

About To Catch A Killer

I saw you trying to save the poor young woman you found in the park.

The woman I tried to kill.

I’ve been waiting for you to find her family. To find someone who cares about her.

But you can’t can you?

Even though I’m the man you’re looking for.

And you will never catch me… 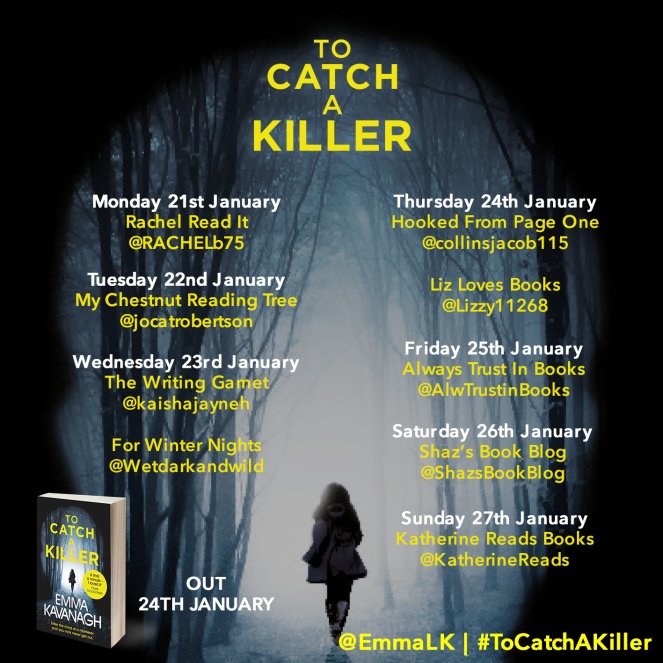 Extract – To Catch A Killer by Emma Kavanagh

When I think about that day, when I think about her, it is her hands that I remember the most. Long, patrician fingers, the nails shaped into a smooth arc, filed with a care that, even to this day, baffles me. The muted pink of them so perfectly applied, the blood that had worked its way into the creases of her fingers, ghoulish and macabre besides the effortless glamour. I remember the way her fingers clutched mine, those perfect nails
raking at my palm as if I represented the final rung on a falling ladder, and that by holding on to me she could hold on to a rapidly disappearing life. Perhaps that was true. Perhaps that was precisely what I was to her. I think about that a lot, you know. About what else I could have done.
Had I realised then what I was dealing with, had I understood just how it would go, could things have been different? There was so much blood. Her throat had been sliced open, the wound a sick mimicry of a smile. The blood spilled out of her in a relentless cascade. And that was without the rest of it, without the battery of puncture wounds that had pierced her torso, and her arms.

It had begun like any other day. But then, don’t they all? The moment before your world changes is just a moment like any other, only becoming notable in the aftermath. It was cold, but the kind of skittish cold that April brings, with the faintest suggestion of warmth lurking just over the horizon. The sun still sat low as if it were considering beating a hasty retreat, not fully committed to the day ahead yet. I knew the feeling well. I hadn’t been sleeping. Or, rather, I had, but in bursts and starts so that when the time came to wake it would always feel as if I hadn’t slept at all. I picked up my pace, my trainers padding against the tarmac. The wind blew, a huff of cigarette smoke sweeping into my face, causing my eyes to prick, my throat to contract; and my gaze found the smoker, a young man, early twenties maybe, narrow arms protruding from beneath a thin T-shirt, leaning against the front wall of a youth hostel. Our eyes met, his gaze roaming approvingly across me. To be fair, he was on my good side. I winked at him, a show of bravado, glorying in his ignorance of what was hidden. This isn’t important. Or, rather, it is, because it explains everything. Rampant insomnia and a resolutely hurried step, pushed faster by unknowing stares. That was it, that was why I was there within ninety seconds of the call coming in. Why it was me and not somebody else. Why we sit here today.

I had set out to work early, reframing my insomnia as enthusiasm for life and the day ahead; had decided against the Northern line, telling myself that the walk would do me more good, even with the chill in the air, that the still empty streets would revive me so that once I got to the police station I would have the energy to spend yet one more day being Detective Sergeant Alice Parr. London in the mornings can do that, you know, the potency of it. The silence before the storm. Only it turned out that that silence was too loud. The sound of my feet, their beat upon the pavement, the abiding groan of traffic, edging in on me, swamping me. And so I turned my airwave radio on so that I could feel the weight of it, hear the thrum of life through it, DS Parr, reporting for duty. I remember the moment the call came over the radio – stabbing reported in Brunswick Square Gardens, just off Hunter Street. It took me a moment to translate the words into a reality, to orient myself. Woburn Place.

Two minutes away. I started to run. I remember taking a hard left, my jacket flapping uselessly, the wind whipping at my face, and – I blush to remember this now – feeling that surge of adrenaline, it bubbling up in me so that a distant and deeply unprofessional part of me wanted to laugh. I didn’t. I’ve been doing this long enough. I rounded the corner onto Brunswick Square, seeing up ahead an old woman. She appeared to be dancing. Of course, that made little sense, but my first awareness of her was of a dark figure pirouetting, silhouetted against the wrought-iron fence of the park, a golden retriever on a lead being co-opted as a reluctant partner.

Then she saw me, and the pirouetting stopped and she began to wave. Not like a ‘Hi, how are you?’ wave, but instead a ‘Help me, I’m drowning!’ one. ‘You police?’ She dropped the lead, gripping my hands, the dog exhaling a tremendous sigh and settling back onto its haunches, apparently just grateful that the motion had stopped. ‘Yes. Where . . .’ ‘In the fields. Through there. The ambulance man is trying to save her. Oh, but there’s so much blood . . .’ I pulled my hands away, taking off in the direction of the treeline. ‘Stay there,’ I yelled back over my shoulder. ‘I’ll be back.’ I pressed the radio. ‘DS Alice Parr on scene at Brunswick Square Gardens. Paramedic on scene. Going to need uniform to establish a cordon.’ There must have been a reply, but I don’t remember what it was.

Thank you to Orion for including me on this excellent blog tour. I am glad I got the chance to share the very enticing prologue for To Catch A Killer. This writing definitely shows how much Emma Kavanagh knows about the grittiness of police work and the how taxing it is on the psyche. I hope this is enough of a taste of the book to get everyone hooked! Please don’t stop here though as there are plenty of other brilliant bloggers taking part so make sure you visit those stops too!

I prefer the book
Book Rant Book Reviews
Being Anne...