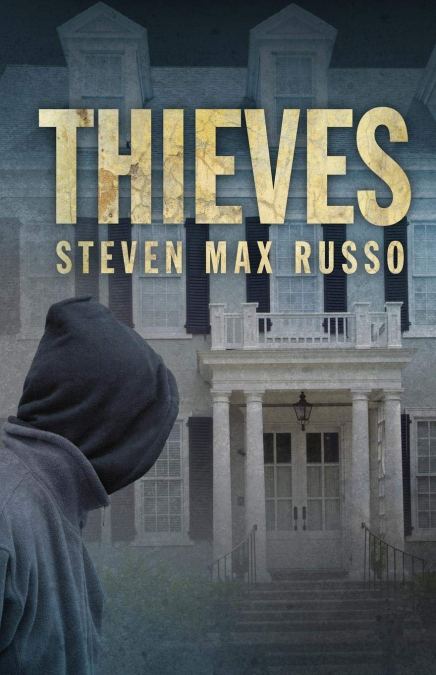 An empty house. A beautiful young woman. A deadly psychopath. What could possibly go wrong?

Esmeralda works for a housecleaning service during the day and as a restaurant hostess at night. Just out of high school, she is the sole support for her mother and two young siblings.

She has drive and ambition. What she doesn’t have is money.

She knows of a home in the upscale town of Mendham, NJ, that will be empty for more than a month. The rich people who live there go away the same time every year to spend time at their vacation home. Having cleaned the house, she also knows it contains a fair amount of cash and valuables.

Sitting with Ray, one of her co-workers one night, she casually mentions a “what if” scenario; Ray tells Skooley, a white trash drifter who recently moved to New Jersey from south Florida, and a plan is hatched.

It isn’t long before Esmeralda finds herself trapped by both circumstance and greed, forced to try and defend herself against one of her partners in crime, who she quickly discovers is far more dangerous than she ever thought possible.

Pick up a copy here: Down And Out Books / Amazon UK / Amazon US / Goodreads

Steven Max Russo has spent most of his professional career as an advertising copywriter and agency owner. He got interested in writing fiction after one of his short stories was accepted by an online literary journal in 2013. Then he caught the bug and began writing seriously. The publication of his first novel, THIEVES, has garnered praise from renowned crime and thriller authors from around the globe. With a gritty writing style and unique voice, he is quickly winning a legion of new fans. Steve is proud to call New Jersey his home.

Thank you Steve for taking some time to answer a few questions about your debut novel Thieves. Could you give us your own personal overview of what we should expect within?

First off, thanks so much for inviting me to participate. It is truly an honor.

I think what readers should expect is a fast-paced, entertaining read that leaves them feeling, well, just a little bit uneasy.

The story involves an unsavory group of characters who decide to rob a house left empty by a rich couple who are off on vacation. Greed, deceit, ego, and violent psychosis all play a part in making what should have been a relatively simple caper go sideways.

The two principal characters, Esmeralda, a beautiful, young Hispanic housecleaner and Skooley, a white trash drifter from Florida, go quickly from an almost amicable criminal partnership to a deadly, high-stakes game of cat and mouse.

What was your initial inspiration for Thieves and its lead character Esmeralda?

I’m not sure where the overall idea for Thieves came from. The initial germ was from a visit I made to a friend’s home right after Hurricane Sandy (I live in northern New Jersey not far from New York City and hurricanes are a rarity). They were away during the storm and asked me to look in. The drive to their home the day after the hurricane was like driving through a war zone. Downed trees and power lines and damaged homes and cars and no electricity. The streets were barely passable. When I finally got to the home, I searched the exterior for damage and realized just how easily someone could break into the house at such a vulnerable time. That idea stayed with me and from it emerged the layout for the home in Thieves.

As for Esmeralda, she grew organically along with the plot for the story as I began writing.

How does it feel to have published your debut novel?

I’d have to say it’s a feeling of almost overwhelming relief.

Writing a novel was hard enough, but getting it published, that was a whole other ordeal.

It seems to me that most publishers are unwilling to take a chance on new writers. Many of the editors and agents who read my manuscript had praise for the story and the writing, but nobody was willing to take a chance and offer me a contract. Then a writer friend of mine, Charles Salzberg, introduced me to Down and Out Books, a small, independent publisher that specializes in crime fiction. Eric Campbell, the publisher, read the manuscript and a few days later there was contract in my inbox. They have also agreed to publish my second novel, The Dead Don’t Sleep, in mid 2019.

What sets Thieves apart from other crime thrillers?

I think it’s the simple fact that Thieves is a novel with no good guys in it.

Even the heroine, Esmeralda, is not really a “good guy,” just “bad” to a lesser degree than the other major characters.

I think there is a “bad guy” living in all of us. It was almost scary at times when I was writing dialogue for Skooley, the story’s primary psychopath, how easily and comfortably his thoughts and words came to me. I understood his motivations and feelings – or lack of feelings. I could rationalize his actions as he rationalized them. I find the constant internal battle between good and evil in all of us interesting. Nobody is good all the time and all of us are bad some of the time. It’s just a matter of degree.

What sort of challenges did you face when writing Thieves?

The biggest challenge I faced was trying to answer the simple question: What happens next?

I didn’t really have an idea for a story when I began; after I wrote the first few sentences, the narrative just seemed to flow.

I have not been at this (writing novels) very long and I don’t really have a process for writing. I don’t outline or plot out what happens next. I just sit down and begin typing.

Sometimes the words pour out of me and I can sit at the computer for hours and if feels like I’ve only been there minutes. But other times, I sit staring at the blank screen not knowing where to go with the story and a sort of panic sets in.

That was the biggest challenge I faced in writing Thieves – and with writing in general.

Did you always know you were going to become a crime author?

No. I always wanted to be an author, but I just didn’t think I had the talent or determination to actually succeed at it.

Plus, writing an entire book always seemed so daunting.

But one day I sat down and penned a short crime story titled Putting in the Work. It’s about a young, white-collar criminal who is coerced into helping orchestrate and commit a murder. The bulk of the story is the actual crime and what this young man finds is that he not only has an aptitude for murder – he actually enjoys it. The story got published in online literary journal called The Rag and that is what started me writing seriously.

I didn’t intentionally start out to be a crime writer, I just wrote what came into my head. But the story was well received and I seemed to have found an aptitude myself with crime and murder. I also read a lot of crime thrillers and I guess that must influence my own writing.

Are there any authors that directly influence your writing?

There are a lot of big name writers whom I admire and have read quite a bit of, probably the two most influential being Ernest Hemingway when I was young and then Elmore Leonard a bit later on. I also enjoy John Sanford, James Lee Burke, Michael Connelly, Nelson DeMille and countless others.

How long did it take you to write and publish Thieves?

Wow, let’s see, the whole process from the initial draft to rewriting to editing to finding an agent (actually, I went through 2 agents) and then back to rewriting and editing and shopping the manuscript and finally landing a publisher – I’d say about four years!

Can you tell us in five words what being a writer means to you?

It means everything to me.

Did you celebrate finishing Thieves?

No, not really. I was already immersed in writing my second novel by then. The two biggest thrills I’ve had so far were when I actually held that first printed galley copy in my hands, and then when my local library agreed to purchase a copy and I saw my book up on their shelf.

Have you got a hobby/activity you do to wind down from all the writing?

I enjoy shooting trap, working out at the gym, salt water fishing, and lying in the sun and drinking beer – not necessarily in that order.

Can you tell us a few details about your upcoming novel The Dead Don’t Sleep?

The Dead Don’t Sleep is another thriller. It’s the story of an Vietnam veteran, an ex-special forces soldier who is now being hunted by a band of ageing psychopathic killers he helped train during the war. It was a fun book to write, very exciting and a bit violent. That book is due out in 2019, also from Down and Out Books. An excerpt is available on my website: http://www.stevenmaxrussobooks.com

I am also currently working on a book tentatively titled The Debt Collector about a young woman who collects outstanding debts for low-end bookies. One of the bookies she’s collecting money for winds up dead and she finds herself being chased by both mobsters and the police while trying to figure out who actually killed her client.

What I would recommend is that readers of this post find a book from a writer that they have never read before. And if they like that book, tell someone else about it. It seems sometimes like books are losing out to movies and TV and online entertainment and I feel that is bad for everybody. People who read understand that nothing can compare to immersing oneself in a great book and that feeling is truly a gift that should be shared with others.

Happy holidays to all.

Thank you Steve for giving us some excellent insights into your debut novel, your upcoming work and how you approach writing in general. I am intrigued by a novel with no good guys in it, I think that will be a cool dynamic to the narrative. Steve seems to bring an unusual element to each of his works so I am interested to see how they work out. Thieves is out now and The Dead Don’t Sleep is out soon so make sure you check both those novels out. We all do our best to support indie authors and I am glad I had to the opportunity to chat with Steve about his novels. Thanks for stopping by, see you again soon!