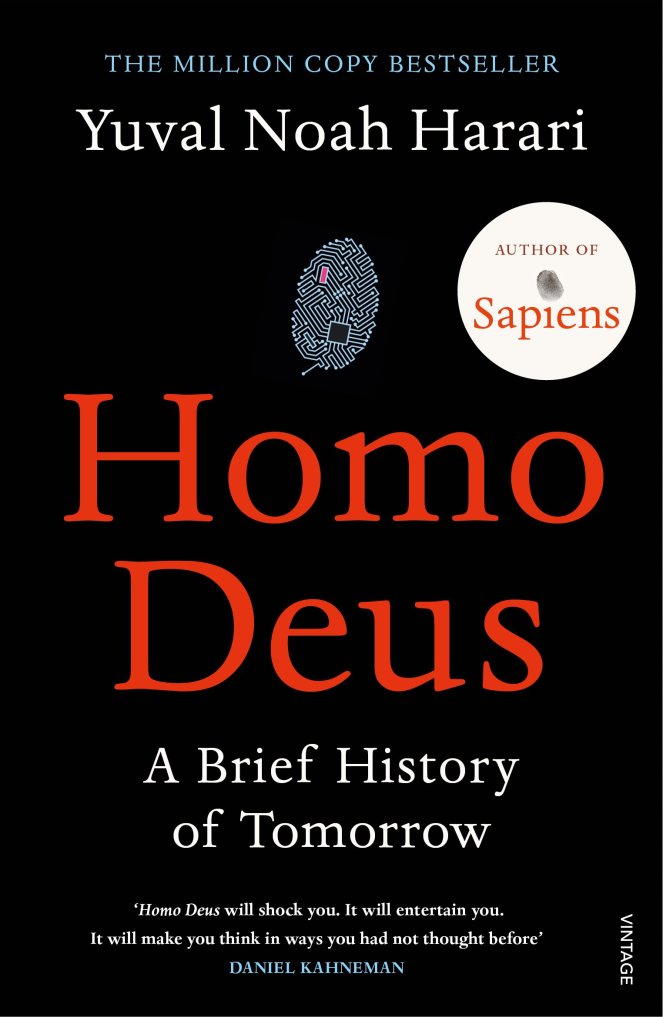 Target Audience: Those who are interested in the inner workings of tomorrow and how things might work out eventually. Readers who love a deep and enriching non-fiction treat.

Yuval Noah Harari, author of the bestselling Sapiens: A Brief History of Humankind, envisions a not-too-distant world in which we face a new set of challenges. In Homo Deus, he examines our future with his trademark blend of science, history, philosophy and every discipline in between.

Homo Deus explores the projects, dreams and nightmares that will shape the twenty-first century – from overcoming death to creating artificial life. It asks the fundamental questions: Where do we go from here? And how will we protect this fragile world from our own destructive powers? This is the next stage of evolution. This is Homo Deus.

What does our future hold?

Dr Yuval Noah Harari has a PhD in History from the University of Oxford and now lectures at the Hebrew University of Jerusalem, specialising in World History. Sapiens: A Brief History of Humankind has become an international phenomenon attracting a legion of fans from Bill Gates and Barack Obama to Chris Evans and Jarvis Cocker, and is published in over 45 languages worldwide. It was a Sunday TimesNumber One bestseller and was in the Top Ten for over nine months in paperback. His follow-up to Sapiens, Homo Deus: A Brief History of Tomorrow was also a Top Ten Bestseller and was described by the Guardian as ‘even more readable, even more important, than his excellent Sapiens’.

Homo Deus was a book I was really excited to read! The tagline ‘A brief history of tomorrow’ really intrigued me as I don’t really put much thought into my life years down the line. This book is a must read! Not only does Harari talk about the future, he does so in such a wide spectrum of elements and details that I was impressed by how much information I took in. It also helps that he kept the language to an accessible and easy to reading level, though there is technicality in some of the areas of the text. When I finished the book I was stuck between two very distinct and conflicting thoughts, the first was that I am comfortable with the steps that we as humans are taking to secure our futures and the other is that I am massively concerned about our future.

Homo Deus: A Brief History Of Tomorrow is one of many groundbreaking books that are coming out this year that will influence certain non-fiction titles for the next decade or so. I have many of these books on my to-read list but I started with Homo Deus as it seem like a book that would cover all the bases and show me what we as humans are doing to secure our futures on earth and how we plan to do so. Yuval Noah Harari definitely achieves this, though it took a long time to get to sections I really wanted to read.

Homo Deus started off strong, outlining what we have achieved up until today and where we may take life in the future. It did this from many different perspectives from agriculture, technology, economy, geography and medicine to psychology, politics, sociology, existentialism and science and it was incredibly interesting.

Unfortunately for some who already have read a lot of books about human history, Harari does typical ‘to see where we are going we must go back to the start’ section which for me was slightly irritating but if you know very little about our past, our struggles and how we came to be then you will be very pleased with this section. I know that sounds like a complaint but it is really just a warning, because though it has been covered many times before, I felt that Harari did a great job with this section.

The next section of the book covers how we brought the world to be in the last 2 or 3 centuries and again it has been done before, but Harari has such depth, understanding and control of the subject that I was left thoroughly informed and prepared for the last section, the one I had been waiting for, where are we going!

I was massively impressed with this section, it both made me excited about the future, what technologies, scientific discoveries and biological/medicinal advances we may create or discover. It also scared the hell out of me too, where societies may change, how our life may become automated and where religion may evolve.

I am not sure whether I enjoyed the subject or the author the most when reading this book. I feel that it is the subject overall as it is uncharted territory for me so to speak, I know I read a lot of science fiction but I have never read a book where someone has sat down and outlined all aspects of our actual humanity and extrapolated them into a realistic vision of our future, please let me know if you have read anything like this before.

In terms of content, it is overwhelming, Harari must do nothing but research as he knows more about humanity than I will ever know, but he is so down to earth and treats readers fairly, not bogging everything down in technicality and jargon but bringing the subject down to a comprehensible and comfortable level. This meant I could read this book without having to look up every other word and pretend I understanding what he is saying instead of actually understanding what he is saying.

If you want to know what we went through to get to this point, the famine, the war, the disease and hunger. If you want to know what life truly looks like today with social media, algorithms, happiness, religion and art. And if you want a vivid depiction of what are future may or may not become then Homo Deus is the book you want. I was most impressed with how Harari was so unbiased, he treated each viewpoint and opinion with respect and lets the reader make their own mind up of what to make of each scenario. Also there are great stories and case studies to back up his points as well as images to give the insights some context or texture.

Fortunately this is not an ‘all is lost’ viewpoint on the future of human existence but it is definitely not all peachy and full of promise. Read the book, see what you think and tell me what you thought on Harari’s approach to this topic. I found Homo Deus engaging, thought provoking, extremely concerning and delightfully promising as well.

Thank you for stopping by to check out my first non-fiction Throwback Thursday. I have read some phenomenal NF titles over the years and it all pretty much started with Homo Deus. It was my first non-fiction review on a blog and it was an immensely popular review with readers which definitely spurred me on to review more NF later on down the line. It was great to delve back into this book once again and I hope to re-read it very soon. Thanks as always for coming by!