Greetings and welcome to my author interview with science-fiction genius Adam Roberts. I have read quite a few of Adam’s books but none blew me away like The Real-Town Murders. TR-TM was an phenomenal locked room murder-mystery with a heavy dose of science-fiction. Each of Robert’s ideas about our near future felt so real it was chilling. Private Investigator Alma is back with another murder-mystery and Adam Roberts agreed to answer a few questions about his work. Please enjoy the Q&A and make sure you pick up copies of The Real-Town Murder and By The Pricking Of Her Thumb as soon as possible. 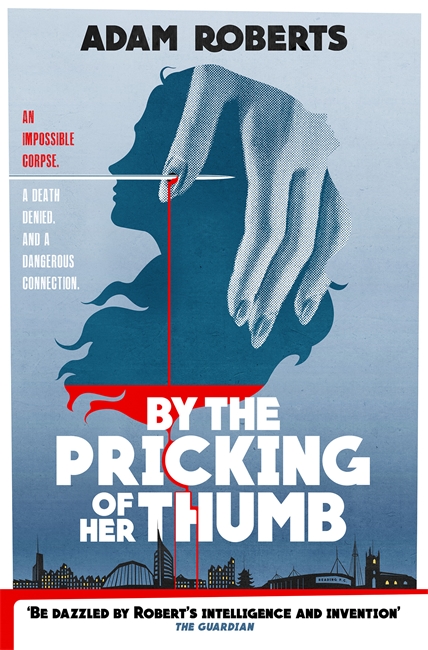 Adam Roberts is commonly described as one of the UK’s most important writers of SF. He is the author of numerous novels and literary parodies. He is Professor of 19th Century Literature at Royal Holloway, London University and has written a number of critical works on both SF and 19th Century poetry. He is a contributor to the SF ENCYCLOPEDIA.

About By The Pricking Of Her Thumb

One of the four richest people in the world may be dead. But which one? A Kubrickian thriller from one of the world’s leading authors of SF.

Private Investigator Alma is caught up in another impossible murder. One of the world’s four richest people may be dead – but nobody is sure which one. Hired to discover the truth behind the increasingly bizarre behaviour of the ultra-rich, Alma must juggle treating her terminally ill lover with a case which may not have a victim.
Inspired by the films of Kubrick, this stand-alone novel returns to the near-future of
THE REAL-TOWN MURDERS, and puts Alma on a path to a world she can barely understand. Witty, moving and with a mystery deep at its heart, this novel again shows Adam Roberts’ mastery of the form.

Pick up a copy: Gollancz / Amazon UK / Amazon US / Goodreads

Thank you, Adam Roberts for taking some time to answer a few questions about your brilliant new sequel to The Real-Town Murders, By The Pricking Of Her Thumb.

What was the initial inspiration for your P.I Alma series?

I’m interested in the possibilities of combining the SF and crime/whodunit modes, because (a few early-period Asimov titles aside) it’s so rarely done — because, the critics say, the two modes really don’t go together, because SF is a fundamentally ontological and Crime/whodunit a fundamentally epistemological mode, because … but that’s enough becauses for one sentence. I did this kind of combination once before with a novel called Jack Glass., so I have, as the fuzz say, form. The inspiration for me to do it again was discovering an anecdote about one of Hitchcock’s unmade movie project. So, Hitchcock talked about this idea he had for the pre-credits sequence of a movie, set (he was speaking in the early 1970s, not long before his death) in a fully automated, robot-only car factory. He said the camera would follow the whole process of a car being made: you’d see the raw materials being delivered by automated truck; the camera would work its way along the assembly line as robots fitted the body panels together, inserted the engine, put in seats and so on. No people around at all; everything automated. At the end of this sequence the camera would follow the now completely built car out the other end of the factory, down a ramp to join a long line of similarly assembled autos. A man would come along with a clipboard to check the build. He would open the boot of the car and …. inside would be a dead body. “If only I could figure out how that dead body got into that car,” Hitchcock said, “I would make that movie.” But he never could, and so the movie was never made. But I could and so I wrote Real-Town. It gave me the chance to write a proper whodunit that’s also a thriller with as many Hitchcockian touches as I like — my own versions of the famous scenes from The Birds and North by North West and so on, as well as other smaller things. Having done it once i was ready to move on, following the principle of my career so far, namely that I always try to do something new with each novel that I don’t write sequels. But then I thought to myself: but writing a sequel would be something new for me. So I thought out a new mystery for Alma, and swapped-out Hitchcock for Kubrick.

Can you give us a few details about what type of science-fiction you explore within of By The Pricking Of Her Thumb and The Real-Town Murders?

Insofar that both books are whodunits I’ve tried to play fair: there’s a murder, a mystery, and the solution should be right there except that the revelation at the end should be a surprise. Insofar as they are both SF, I’ve tried to do what I ususally do, and work-in some cool ideas, to use my extrapolated (near)-future to think-through some of the stuff that interests me. In Real-Town that was a set of ideas about gender and bodies, physical embodiment and virtual disembodiment. In Thumb it was mostly stuff about money, crypto-currencies, exchange and so on. I’m thinking about writing a third, and so completing a trilogy, something else I’ve never done before. This third book, if I can get around to it, would most likely be about sex, and instead of Hitchcock or Kubrick I’d use as my conceptual template the cliches of erotic filmmaking: and since it would still be a whodunit, this would give me the chance to work through some thoughts about the proximity of sex and death. Provisional title: Debbie Dies, Alas. Or perhaps Murder on the Orgasm Express. Or conceivably The Murder Whilst Rogering Ackroyd. Actually there are lots of possibilities …

Is there a particular character or element in By The Pricking Of Her Thumb that you especially enjoyed writing about?

Murder mysteries are promiscuous with their deaths, by defintion, but very rarely explore the consequences of death. Death is brutal on those left behind, and one of the things I specifically set out to do in Thumb was write about bereavement. I didn’t expect to enjoy doing that (it’s hardly a bag of laughs, after all) but in the event that was the section that I found the most satisfying to write.

What sort of challenges did you face when writing about near-future immersive technology, a nation hooked on VR and mysteries set in such a world?

The biggest challenge was avoiding simply rolling down the rut of a thousand prior texts: Neuromancer and The Matrix and Ready Player One and all that. How to represent an immersive VR without it coming over merely secondhand and derivative? What I decided to do was to leave all the actual inside-the-VR stuff offstage and focus the story on the run-down real world people have, mostly, abandoned in order to escape to their artificial paradises.

Had you always wanted to become a science-fiction author/writer?

Pretty much. There were a couple of years in the mid-1970s when I wanted to make animated cartoons, but that came to nothing. I’ve read SF and Fantasy more-or-less obsessively all my life, so when I realised I really really wanted to be a writer it was a no-brainer as to what I was actually going to write.

Are there any authors that you look up to as a writer that has helped shape your work?

Too many to name here.

How long did it take you to plan and write By The Pricking Of Her Thumb and The Real-Town Murders?

Different writers have different strategies, and it’s all good so long as it gets you to the end-point satisfactorily and with reasonable promtitude. When I was starting out as a writer I used to sketch-out fairly detailed plans. This far along in my career I find I don’t need to do that, by and large, and I tend to work by writing out a rough-draft over a couple of weeks, sometimes months. This I then sit on, for as long as I can; then I go through and revise slowly and carelly. With Real-Town that process took me about six months in all; Thumb took my not quite so long, because writing it coincided with research leave from my day-job, so I had fewer distractions to juggle.

Can you tell us in five words what writing means to you?

You mean, only using words from songs by the pop-group “5ive”? OK: “Keep On Movin; Slam Dunk”

Did you take the time to celebrate the conclusion of writing your book and its release?

I’ll confess to having a glass of whisky to celebrate typing-out the words THE END. I mean, I say “glass”. It turns out, beyond a certain size glass needs to be so thick to avoid shattering that it becomes unwieldy, and other materials are preferred. Still: there’s no shame in drinking out of an aluminium bucket, I think.

Have you got a hobby/activity you do to wind down from all the work and writing?

I’m building a lifesize Wicker Man in my back garden. When the time is right I plan to get all my friends to dress up in animal masks, bung Ian McEwan inside and set it alight, in order to guarantee the fecunidty of next year’s SF and Fantasy crop.

This is a little self-serving, but I’m in the middle of writing a literary biography of H G Wells for Palgrave Macmillan, and pursuant to that project I recently either read or re-read the entire run of Wells’s fiction and non-fiction. I mean: Wells’s SF was, and is, a huge influence on the kind of stuff I write, and getting to know his entire body of work has been wonderful. The sheer scope and number of masterpieces he produced is nothing short of staggering. But — here’s what I would like followers of your blog to do. Read Wells’s last-published book: Mind at the End of its Tether (1945). It’s not long (barely 30 pages) and is available online free in various places

… but though I’ve read it a couple of times, I’ve honestly no idea what it’s on about. So if you could have a read, and let me know, that would be very helpful.67

Thank you Adam Roberts for taking the time to delve into the details behind your work. The blend of science-fiction and mystery is a fantastic treat and I hope that Roberts decides to continue exploring this series in the future. By The Pricking Of Her Thumb is out now and you should definitely secure yourself a copy and get lost in complex mysteries and a hauntingly vivid vision of our not-too-distant technological future. I hope you enjoyed the Q&A and keep an eye out for my review for By The Pricking Of Her Thumb very soon.