Welcome everyone to another enticing guest post here on ATIB. Today I am sharing a piece written by Katherine McIntyre, author of the Take To The Skies series, and it discusses the definition of Steampunk. Is it more Science-Fiction or Fantasy based? Katherine talks about the subject in general and also goes into her own decisions when it comes to exploring the genre in her own work. It is a great read and an excellent contribution to the topic of what Steampunk actually is. Enjoy the post and make sure to check out the series as it looks really cool! 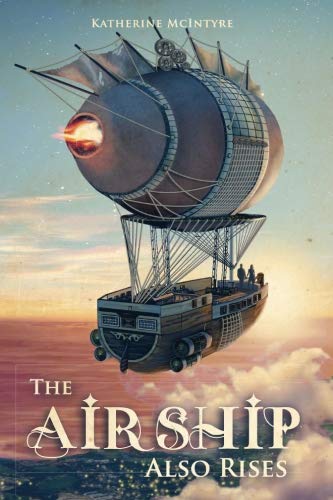 I split my time writing and working my day job as a massage therapist. If it’s a creative pursuit though, chances are I’ve dabbled in it. Hell, I’ve played around with soapmaking, beer brewing, cupcake baking, tea blending and everything else under the midday sun. At the end of the day, my constant is always reading, writing and editing. I’m an Aries-Taurus cusp–which to any astrology buffs should tell you plenty.

I hit the East Coast convention circuit pretty hard and chances are, you can find me vending for Solstice Brews while simultaneously promoting my books. As for more journalistic writing, I’m the founder, an editor, and a writer on Caffeine Crew. (Read more on Katherine’s great website, link below).

About The Airship Also Rises

The crew of the Desire returns for one final, thrilling adventure.

Ever since Bea and the crew stole that box from the British Merchant ship, they’ve been drowning under enemies. The Brits, the Morlocks, and the man who started it all—their ex-employer.

However, Bea finally tracks him down and prepares for one final fight against the man who made their life hell. He’s got superior numbers and more weapons and wealth than she could dream up, while she’s got a threadbare crew running on grit and dreams alone. The crew of the Desire doesn’t stand a chance.

But Bea’s spent a lifetime defying the odds, and she and the crew will risk it all—their livelihood, their ship, and their lives, for the chance to fly the skies free once more.

Secrets will unravel and loyalties will be tested in the smoking conclusion of the Take to the Skies series.

Pick up a copy: Amazon UK / Amazon US / Goodreads

I’ve been writing steampunk books for about six years now, and when introducing the subgenre to someone new, the inevitable question follows. What IS steampunk? And in my explanation, what I most often tie it to is the science fiction and fantasy genres. Readers from those genres tend to readily accept steampunk, as there have been niche variations in science fiction and fantasy for years. But out of the two, which does steampunk fall under?

Since steampunk itself is a wildly changing thing, without rigorous lines and definitions, it’s impossible to place it in either category solely. What I’ve noticed through exploration into steampunk work, is that whether a steampunk story is classified as fantasy or science fiction is based solely on the story itself.

Is it gear heavy? Futuristic with lots of mechanisms and devices? Those sorts of stories tend to fall under science fiction, since a large amount of sci-fi involves imagined futuristic technologies. However, I’ve also seen steampunk stories that integrate magic, and mystical creatures, and those would fit more staunchly into the fantasy category, even with tinkerers and automatons. What ends up defining the final placement is what conventions the story adheres to most heavily, and with a fluid sub-genre like steampunk, that leaves the choice up to the author.

For my Take to the Skies series, I set it in an alternative future with airships. However, despite it being science fiction, it also genre-blends with action and adventure all too well. The series has more of a western feel than anything, which could fit in either science fiction or fantasy universes, so I went with the technological and futuristic elements to define the story’s category. One of the best things about steampunk is the wild creativity involved in the community and its ever-expanding definition. It’s never too late to join in on the fun!

Thank you to Katherine McIntyre for writing an excellent guest post for us all to enjoy. This is the first time I have come across The Airship series but it certainly looks great and I hope to read them all very soon. I was glad when Katherine approached me about sharing her thoughts on Steampunk as it is a popular and somewhat misunderstood genre. I love the look and sound of Katherine’s work and she is obviously passionate about writing empowering and gripping fiction. Check out the series as soon as you can and let me know what you thought.