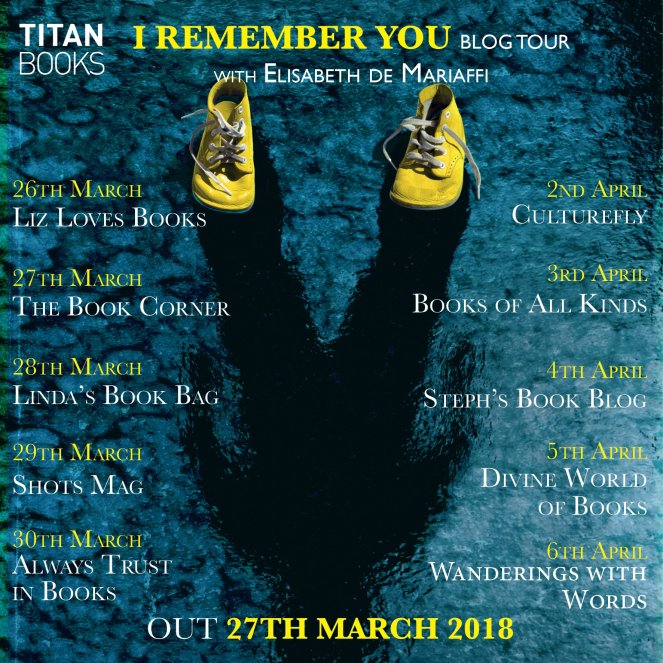 Good morning and welcome to my stop on the I Remember You blog tour hosted by Titan Books. I have an extract to share with you which is the first chapter of the book. It is an eerie and dark beginning but it sets the tone of the book perfectly and I can’t wait to read more. Check out the extract and see what you think. Also make sure to check out all the other stops on this tour for reviews, guest posts, Q&As and more.

About I Remember You

Heike Lerner has a charmed life. A stay-at-home mother married to a prominent psychiatrist, it’s a far cry from the damaged child she used to be. But her world is shaken when her four-year-old son befriends a little girl at a nearby lake, who vanishes under the water. And when Heike dives in after her, there’s no sign of a body.

Desperate to discover what happened to the child, Heike seeks out Leo Dolan, a television writer exploring the paranormal, but finds herself caught between her controlling husband and the intense Dolan. Then her son disappears, and Heike’s husband was the last to see him alive…

I Remember You Extract

Elisabeth de Mariaffi is the critically acclaimed author of the Giller-nominated How to Get Along with Women and The Devil You Know. The Devil You Know is currently in development for television with New Metric Media. It was shortlisted for the prestigious Thomas Raddall Atlantic Fiction Award and longlisted for the 2017 International DUBLIN Literary Award. Born and raised in Toronto, she now makes her home in St. John’s, Newfoundland.