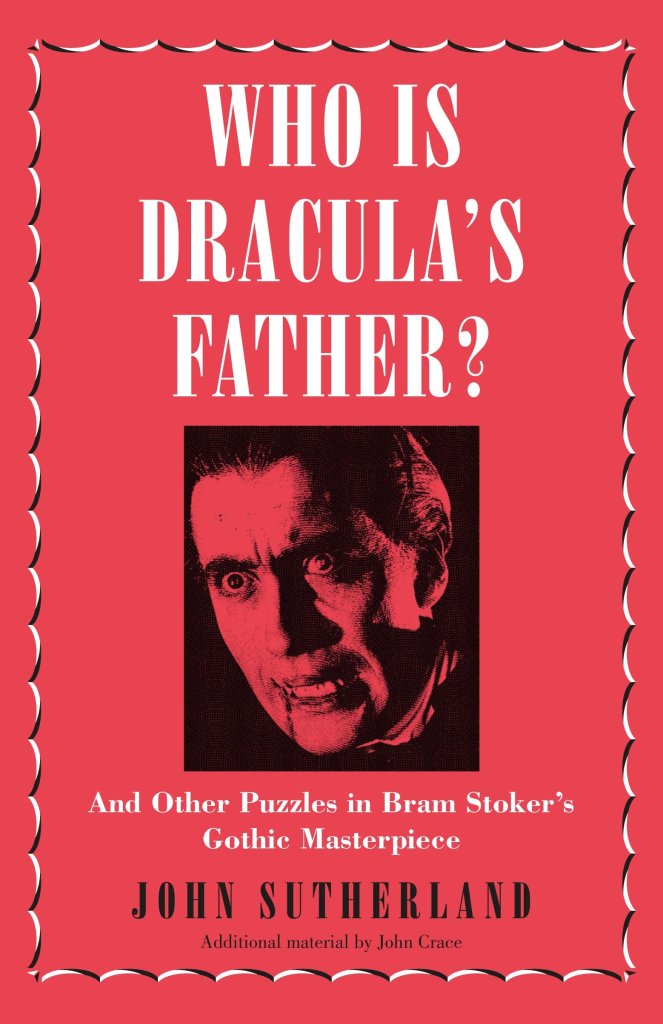 Sent to me by Icon Books in exchange for an honest review.

Summed up in a word: Inquisitive

Why is Dracula aristocratic?
Where does the word ‘nosferatu’ really come from?
Just what is the point of R.M. Renfield?

For 120 years, Bram Stoker’s Dracula and its shape-shifting, bloodsucking Count have thrilled and terrified readers, abetted by stage and screen versions from Nosferatu and Bela Lugosi to the Hammer films and Gary Oldman.

Here, John Sutherland, author of Is Heathcliff a Murderer? and Can Jane Eyre Be Happy?, presents a toothsome new collection of literary puzzles, scrutinising the fine and not-so-fine points of this beloved text to raise some curious questions and reach some surprising conclusions.

Along the way we learn about Stoker’s love-rivalry with Oscar Wilde, his ‘dreadful’ stage adaptation of Dracula, performed to an audience of two, a tantalising dropped prelude set in Munich, and much more.
Who is Dracula’s father? Who, for that matter, is Quincy P. Morris? Why does the Count take such pointless risks? And why are there still so few vampires? Take a peek behind Dracula’s cloak and find out.

Bram Stoker’s Dracula is one of the first 19th classics that I truly connected with. I was fascinated by the folklore and mythology surrounding one of the most iconic horror characters ever to be penned to paper. John Sutherland takes seminal texts such as Dracula and analyses the loose ends, potent questions and areas that require more elaboration. I thought Who Is Dracula’s Father? addresses key, thought provoking and brain teasing topics surrounding the classic tale.

I recommend this for fans of the novel as, though it is packed with trivia and detail, you need to understand the text to glean a fuller understanding to what JS is getting at. John delves into the curiosities and inconsistencies that populate Dracula. The essence of the book is inquiry and exploration. There are funny moments, as well as entertainment, but for the most part JS is interested in answering questions about the text that have been floating around for decades. From Dracula’s lineage or origins, what influenced Bram to write the way he did and confirming the actual appearance of Dracula to the meaning behind Nosferatu, why Dracula is a risk taker and his actual physiological make up.

John Sutherland writes with passion, intrigue and vigour. I was impressed with how many stones he managed to look under in such a short volume. Who is Dracula’s father? brings our attention back to a seminal novel that set the tone for all the horror/fantasy books that followed in its wake. Dracula took a long time to be appreciated but he has become a household name. JS takes this essence and builds on it, reminding me to invest more time in the classics, and has made me want to revisit more influential books. It is a broadly fascinating read that address the history, ideological, cultural, literary and personal influences on Bram and his one-of-a-kind novel.

JS has written an inquisitive book that made me chuckle, gave me tantalising insights into a great novel and most importantly helped me flex my brain and be more considerate when reading novels. JS did his absolute best to answer each question with analysis, references, quotations and insights from the last century and overall I think he did a great job with it. The idea behind this series is ingenious and I hope JS explores more of my favourite classics in the future.

Pick up a copy of Who Is Dracula’s Father here: Icon Books / Amazon UK / Goodreads

John Sutherland is Lord Northcliffe Professor Emeritus at University College London and an eminent scholar in the field of Victorian fiction, author of many works including The Longman Companion to Victorian Fiction. He has also written the bestselling popular titles Is Heathcliff a Murderer? and Can Jane Eyre be Happy?, and such scholarly jeux d’esprit as Curiosities of Literature.

One thought on “Who Is Dracula’s Father? by John Sutherland (Review) @iconbooks #NonFictionNovember”