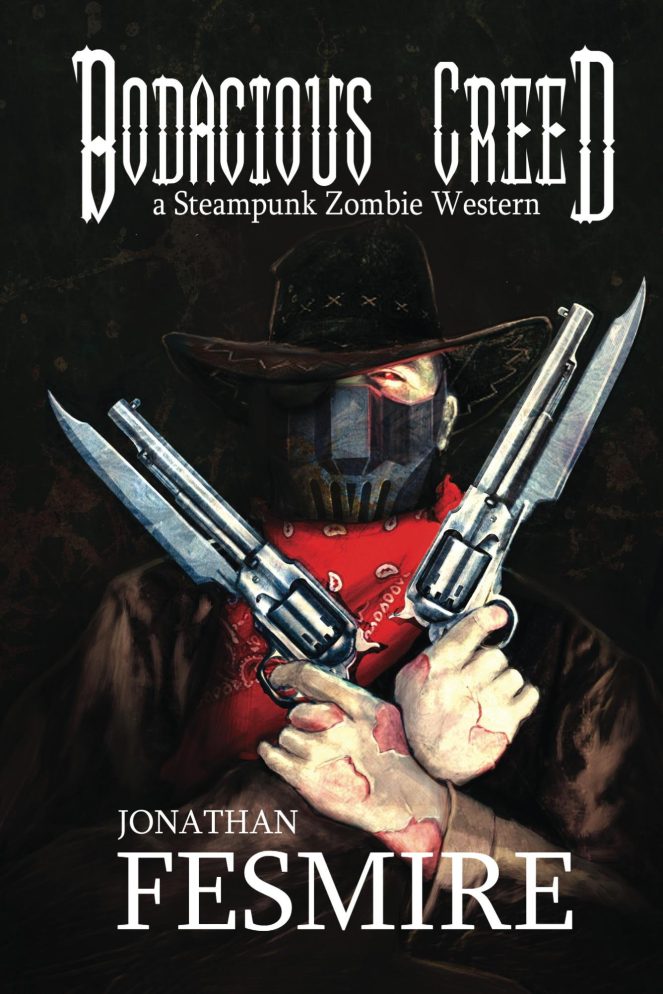 Hello everyone! I have an extract to share with you all today from Jonathan Fesmire, author of Bodacious Creed: A Steampunk Zombie Western. I really enjoyed reading all the chapters that JF sent me but I have chosen to share Chapter Six with everyone because not only does it set the scene for the novel perfectly, it also shows off JF’s precision and explosive writing. There is so much to appreciate about this novel, the clash of genres looks to have been handled very well. See for yourself in the extract below. Enjoy!

Author Jonathan Fesmire, originally from Santa Cruz, California, now lives in Southern California with his son. By day, he’s a copywriter, by evening a steampunk author, and at all times, a dedicated dad.

Though Jonathan started out writing fantasy, he has moved completely to steampunk, enchanted with its aesthetics, possibilities, and implications. He’s a fan of the stories, the art, and the gadgets, and enjoys interacting with the community.  In fact, Jonathan regularly interviews popular members of the steampunk community for his The Wild Steampunk Blog.

U.S. Marshal James Creed has known loss, starting from the untimely death of his wife and daughter in a sudden fire. His work, chasing down and arresting outlaws across the Wild West, is all he has left to live for. Then one day, in 1876, the infamous killer Corwin Blake catches Creed by surprise and guns him down/.

Creed awakes after a mysterious young woman resurrects him in a basement laboratory beneath a brothel. Half alive, Creed feels torn between his need for justice and his desire to fall back into the peace of death. Creed’s instincts drive him to protect the city of Santa Cruz, California, from the outlaws it harbors while searching for Blake.

He uncovers a secret criminal organization, likely protecting Blake, determined to use resurrection technology for its own ends. The former marshal, now faster, stronger, and a more deadly shot than ever before, must work with a brothel madam, a bounty hunter, and the remaining marshals to uncover the criminal syndicate before they can misuse the machines of rebirth and create more mindless zombies. Meanwhile, he must also stop Blake, before the outlaw kills the only people he cares about.

His own death can wait.

Maxwell Gregg stood beside Corwin Blake’s bed, the Tesla bulbs in the ceiling dim. Why had he bothered to give the kid such fine guest accommodations? Did Blake need a bed large enough for three? Did he need two quilts and six pillows, the rocking chair, the wide table, or two shelves full of books? The air smelled of Blake’s sweat, alcohol, and the red roses in a vase on the table. Blake lay naked atop a soft quilt, a red-tinged bandage around his leg, a sheet draped over his hips and crotch.
The outlaw stared up at Gregg, blinking lazily. He had finished half a bottle of single-malt scotch, again more than Blake deserved, while the medic removed the bullet, then cleaned and sewed shut the wound with silken thread.
“We had you covered,” Gregg said. “You had to have your fun though, didn’t you?”
“What did you want me to do? Go to the back room?”
“That’s exactly what you were supposed to do.” Gregg wrung his hands behind his back. In Iron Nelly’s, Blake had ducked behind the bar just as James Creed and Bennett Nelsen had entered. Somehow, the young killer had remained quiet, though Gregg imagined he had probably worked hard to suppress laughter.
Jason knew that Gregg would evade the lawmen, and had done just what Gregg would have wanted. Seamless work for a well-run organization.
“You’re not here to tempt the law, Corwin. They’re not your playthings.”
“Ain’t they, though?”
“One more stupid move like that, and you won’t like your accommodations.”
“I don’t think your sister’s gonna like how you’re talking to me,” Blake said.
“Melba doesn’t run the Syndicate.” Gregg glared.
Blake squinted at the light above. “Well, you gotta, ah, you gotta let me do something for you. I don’t want to stay down here all the time.”
“Show me you can behave as expected.”
As Gregg headed for the door, Blake called out, “I will. You’ll see. Whatever you need.”

Creed slept soundly on the night of July third, even though the posse had not caught Blake or his accomplice. If anything, Creed suspected their search had driven the men deeper into hiding.
After a few hours of gathering deputies around town, they had a posse of just fifteen, thirteen of them from Nelsen’s trip to The House of Amber Doves.
They had worked in shifts. First, half the men rode into the Flats to ask questions of the citizenry while Creed checked records in city hall to see who owned the smoking building. The deed belonged to a Steven DeGraw, but when he asked the clerk about the man, she informed Creed that DeGraw had passed away three years prior with no heirs. The property belonged to the city.
Nelsen oversaw the investigation there, while Creed returned to Iron Nelly’s.
Jason Nash, the proprietor and bartender, claimed not to know the name of the stranger they had followed, only that the residents called him Heilong. According to rumor, he ran a criminal organization. Nash claimed that crime in the area didn’t seem organized. Creed thought it interesting that Heilong, despite the Chinese moniker, was a white man with medium brown hair and a plain, shaven face.
Rather than speak, Nash wrote all this on a note and tore it up after Creed read it.
Creed returned to Nelsen just as the men they had recruited began heading out to ask questions around town. Nelsen showed him their findings. Deputies had pried boards from the walls and floor. In the very wall where Creed had pulled off the first board, they had found a furnace, tall, flat, wide, and wired to a small power generator. A switch beneath the window activated it.
The generator had no brand markings and didn’t match any made by Morgan’s Mechanicals, making it illegal.
Next, Creed and Nelsen checked the buildings that surrounded the flower shop, where Blake had climbed the wall. The residents had no issue with letting the men look inside, though darting eyes and shaking hands gave away their fear. A helpful negro couple explained they had heard noises on their roof a few times in the last year, but thought that cats were scratching up there.
After about an hour’s search, Creed found a trapdoor hidden under the shingles on the roof of the flower shop. It opened to a space no larger than a coffin. Were there many like this?
Creed found a deputy leaving a pipe store and sent him to retrieve the rest of the posse. Within the hour, they had gained entry to a dozen buildings. Three hours later, they had found five more rooftop compartments, one where the couple had heard occasional scratches. None opened to the buildings, however. Someone had built them for the sole purpose of hiding.
Around midnight, Creed and Nelsen headed out, just as the shift of night time deputies entered Railroad Flats. Creed spotted a big man, even taller than himself, with broad shoulders, a black coat, gambler’s hat, and hair to match. That meant the night posse had done more recruiting. Good. Perhaps the big man would put some fear into Blake’s heart.
Nelsen had ridden off toward the woods, where he lived in a cabin with Heidi, just far enough out of town to enjoy the forest calm and fresh air. Had he not shied away from marriage, that might have been Creed’s life. Instead, he lived and worked alone. Family lost. Love lost. He wondered how much longer he could push aside the ache.
He washed in a bath house on Pacific Avenue then returned to the federal post to bunk down for the night. Some men, after a day like Creed’s, might have had trouble sleeping, weary but worried. Creed had worked hard on July third. Though Blake remained hidden, they would find him. He shut his eyes and within a few minutes, entered a dark sleep.

Thanks again for stopping by to check out another brilliant extract! I am constantly looking for fantastic authors from a wide range of authors that I can promote to you all. Enjoy the extract and if you do pick up the book then please leave a link in the comments to the review. I have an interview with Jonathan Fesmire coming up soon so keep an eye out for that.