Sent to me by Little, Brown in exchange for an honest review.

Summed up in a word: Modern

First Impressions: I am a huge Chris Brookmyre fan so of course I was going to request this from Net Galley (Thank you for approving my request!). I am probably not the best source of unbiased opinions when it comes to the Brookmyre… with that in mind, let’s discuss Jack Parlabane’s latest adventure! UPDATE: I have been added to the blog tour list, which is awesome. So today’s post is now part of that tour. Please check out Little, Brown’s website for more info on all the epic releases they have in-store for 2017. https://www.littlebrown.co.uk/. Also check out the other stops on the tour for plenty more info on Want You Gone. (Poster is at the bottom of the page)

Book Synopsis: What if all your secrets were put online?

Sam Morpeth is growing up way too fast, left to fend for a younger sister with learning difficulties when their mother goes to prison and watching her dreams of university evaporate. But Sam learns what it is to be truly powerless when a stranger begins to blackmail her online, drawing her into a trap she may not escape alive.

Who would you turn to?

Meanwhile, reporter Jack Parlabane has finally got his career back on track, but his success has left him indebted to a volatile source on the wrong side of the law. Now that debt is being called in, and it could cost him everything.

What would you be capable of?

Thrown together by a mutual enemy, Sam and Jack are about to discover they have more in common than they realise – and might be each other’s only hope.

The Review – How do you beat someone who can destroy your life at the click of a button…? Brookmyre’s great combination of thrills, humour and panic-ridden storylines is still as potent as ever.

Jack Parlabane is back to his usual investigative journalism based shenanigans in his eighth full length novel Want You Gone. Jack is certainly feeling the strain due to the change in modern media, everything has evolved so much since he started his career 20 years ago. Pressure can force a man to do many things and Jack’s desire to get his career back on track combined with an individual from his past called Buzzkill back in the picture, Jack has to adapt yet again. With a brilliant and hectic plot centred around hacking, Want You Gone is a thrilling, modern and increasingly relevant novel about the online threats we face today.

Want You Gone follows Jack trying to get his career back up to speed after some failings in previous outings. The novel also follows Samantha Morpeth, a young woman who is struggling to keep her family afloat while her mother is in prison. Sam is trying to stay above water. Her younger sister Lilly has Down’s Syndrome and needs appropriate care. Sam is conflicted as she wants to stay in school but is unable to afford it. Alongside her situation, Sam faces bullies, racism, the government, gangstas and ultimately an unknown threat that is blackmailing Sam with her darkest secrets.

The novel begins with an online bank heist. The hacker known as Buzzkill and it’s crew are taking down the Royal Scottish Great Northern Bank for many reasons, including fraud, but mainly because they can. Want You Gone highlights so many key issues with your online presence and how easy it is for someone to come along and destroy you. The depth and detail of the hacker culture is incredibly interesting but mainly fear inducing. The theme of the novel is blackmail. Parlabane, Morpeth and Buzzkill are all being targeted by a hacker calling themselves Zodiac. Zodiac wants to take possession of a piece of advanced technology that will have a huge influence on the future of technology. Using each of the characters skills, they must plan and execute a heist to retrieve the device.

I have read quite a few of CB’s novels. I have only read the first two instalments of this series so I don’t have a wider understanding of Parlabane but I know enough to appreciate him as a main character. I like the way that CB has significantly developed him as a character over the course of his books, instead of keeping him as the same old character every time. My favourite thing about Parlabane is the fact that he is not a hero, but he is capable of truly heroic acts. Parlabane wants to get the job done, no matter who stands in his way. He is a journalist who ‘dabbles’ in industrial espionage on many occasions. The fact that he can’t seem to keep up with modern technology as it evolves exponentially, grounds him and made me invest myself in his cause.

Sam is another brilliant and conflicted character. Her life is imploding, the struggle is getting too much. But when it rains it pours and the most recent threat pushes her to change into someone tougher, more confident and definitely more brutal. Buzzkill is capable of anything. Hacking your computer to get hold of embarrassing/private photos and sharing them with the entire internet? No sweat! Nothing or no one is safe online really, and it is a relevant problem for us all.

The writing is just as good as it has always been. Brookmyre has consistently written thrilling and exciting novels with plenty of emotional depth and Want You Gone is another success. CB has chosen to split the perspectives between three characters (with both first and third person perspectives) and it definitely made the novel stand out more. The drastic differences between a young woman down on her luck, a smart and chaotic hacker and a veteran journalist trying to fight the tide of technology made for an upbeat and complex read. I loved all the little hacker flourishes and terminology, Buzzkill is a magician when it comes to computers.

Fundamentally Want You Gone is a heist novel. There are a collection of great themes running through the novel including blackmail, dysfunction and obsession, but there are more upbeat themes like humour and espionage that elevate the book to a great read. The tone is mainly desperation and panic, but as events develop and the characters are pushed to their limits, they begin to push back… hard. I have given Want You Gone 4.5/5 stars because even after 7 novels in this series, CB is concocting brilliant and relevant fiction populated by striking and appealing characters.

About Christopher Brookmyre: Chris Brookmyre was a journalist before becoming a full-time novelist with the publication of his award-winning debut QUITE UGLY ONE MORNING, which established him as one of Britain’s leading crime authors. His Jack Parlabane novels have sold more than one million copies in the UK alone. 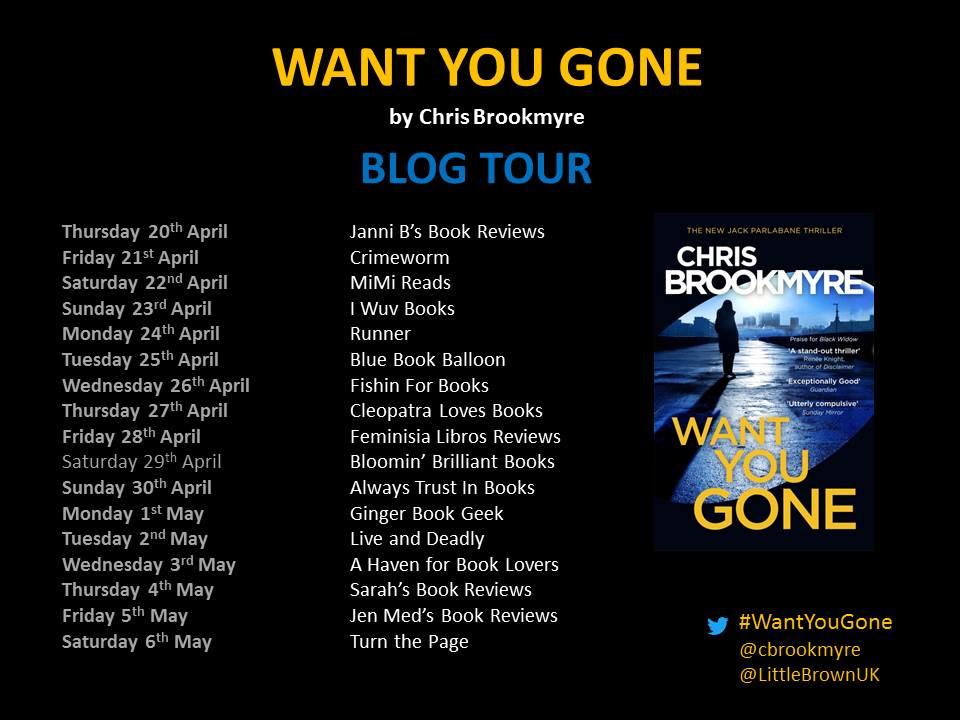